As many reading this will know, worlds was a thing. This past weekend, the 32 best in the world competed for their claim to the title of World Champion. We saw a lot of decks, a lot of upsets, and a hero that nobody thought would take the whole thing.

I had the honor of hosting live coverage of the event on Shadow Era TV alongside tournament organizer and design team member GondorianDotCom, another designer Mojumbo, lead tester Soothslyr and the occasional voice of Kyle Poole himself, lead designer and CEO of Wulven Studios.

In today's post, I'll recap some of the games, decks, and players that showed up over the weekend, the expected and the unexpected, and some insight on how the results may affect the quickmatch meta.

In case anyone hasn't seen Worlds 2012 results just yet and wants to experience it in probably the best way possible, the Shadow Era TV coverage is up on YouTube. Follow the link below, which will take you to the three hour, 13 video playlest detailing the top 4 games from start to finish.


32 players, thirty through the swiss and two wildcard winners, faced off in the first round of the finals. The breakdown for hero choices looked like this:

Here's a list of all players, their deck choices, and their final standings.
To summarize, here's the hero distribution at each level:

First on the list in terms of quantity is Majiya, which is no surprise. Top of the pack in QMs leading up to worlds, as well as being a personal favorite for many high profile players such as Raphael Majere, rarely is there an event without Majiya taking part and worlds was no exception.

The featured list for Majiya is the one Raphael Majere used to carry himself as far as any Maj deck went; losing to iClipse's Zhanna in the last round of day 1.

Hero (1)
Allies (14)
Abilities (22)
Items (3)
Unique choices to note is the lack of Brutalis, which Raph was worried do nothing to opposing Infernal Gargoyles, the use of Acid Jet over Ley Line Nexus to help deal with any potential annoyances like Wrath of the Forest, Wizent's Staff, and Jeweler's Dream, and lastly cutting a Tome of Knowledge, relying on Majiya's ability, Sacrificial Lamb and Shadow Knight to provide the extra gas in case one isn't found. The fact that this differs so much from the quickmatch norm just goes to show how much worlds is on a whole other level.

I've personally tried this list on for size and found it does less than stellar against qm menaces such as Eladwen Rush thanks to the lack of Brutalis, but for the worlds meta, with 22 shadow decks in the running this was definitely the correct choice.

Zaladar also showed up in fairly high numbers, but just like Majiya decks, none of them lasted through to day 2. This hero is just as popular as Majiya in terms of use, but has so many ways to be built that he and his win percentage are still rather unpredictable, and this showed. Zaladar had appearances in top 8 and top 16, but just as many tanked out in the first round.

A nice example of what Zaladar looked like at worlds is this stack from Fou DeLile, who ended up losing to RedPuma's Majiya after a tight game in the first round. After his own admission, he lost due to his own misplay in a poor matchup moreso than anything that could be done differently with the decklist itself, so I wouldn't knock it.

Both Lance and Majiya rely on crucial T5 hasty beats, and those two heroes were expected to (and rightly so) fill a large part of the field. Both heroes tend to make a T4 play that doesn't advance their board, Lance with Ill-Gotten Gains and Majiya with Portal. By denying them their main recovery plays, you can push the opening they give you and get plenty advantage, all without actually expending any cards.

This list in particular added Plasma Behemoth as a way of getting around Moonstalker's ability. However, PB is a bit less than useful against Majiya's hasty Shadow Knights and Supernovas, so Fou never got to show off that part of his strategy.

Moonstalker also came to game in this event, with a host of ally-based lists. They didn't get covered much on the stream (games with MS as the hero tend to be less than thrilling to watch) but they were there in numbers. One of them in particular was built by none other than top 16 competitor Ace.


Allies (18)
Abilities (17)
Items (4)
Of note in this list is the inclusion of Shadow Font, which helps push through Priest of the Light's disruption. Shriek in this list also gets three whole slots, showing just how key the card is at dealing with a wide range of cards across the field.

Captured Prey actually is trimmed down one to make room for Font, and honestly I can see why. With reliance on hasty beats, Sacrificial Lamb, Retreat, Aeon Stormcaller, and (oddly enough) Healing Touch, using your allies to dominate the board seems just as if not more reliable than relying on the otherwise staple attachment.

Lance indeed made a showing, but by far not as much as many expected. Extremely widespread in the quickmatch scene, Lance decks will be a constant presence no matter what happens with the format. Let's take a look at the Lance deck piloted by Rob 'best in the world' Van Dam, also known as PPStar.

Hero (1)
Allies (20)
Abilities (9)
Items (10)
Note the lack of Kristoffer Wyld, no doubt due to its ineffectiveness against Infernal Gargoyles and Brutalises that were sure to be all over the place this event. Priest of the Light is relevant against most opponents here, especially the mirror, and Spelleater Bands serve well to shield from Supernovas and the second half of Lightning Strikes.

Unfortunately, PPStar in particular had technical difficulties at the start of the event, winning the first game and then disconnecting during the second and third. Lance could easily still be a contender, but it's unclear just how much. 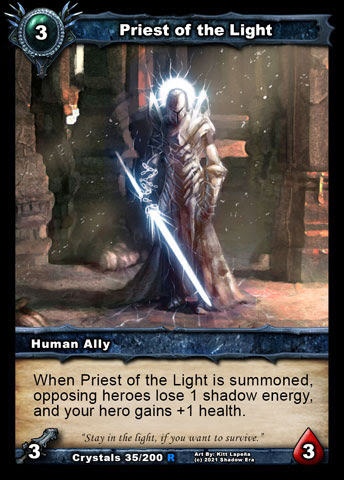 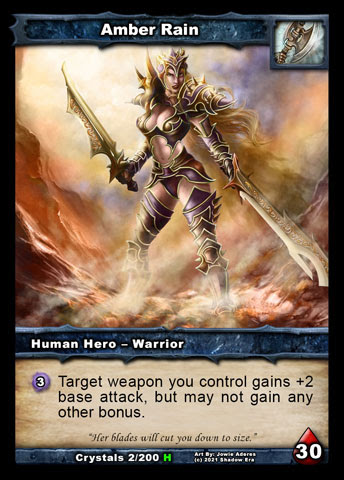 Now let's take a look at the decks who made up the top four. 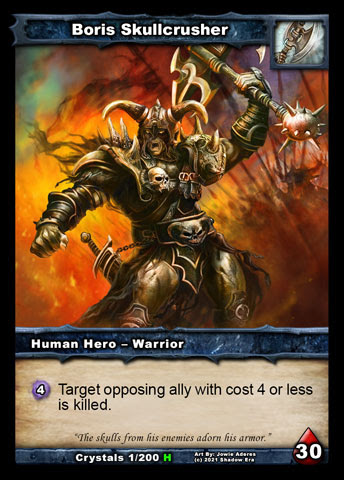 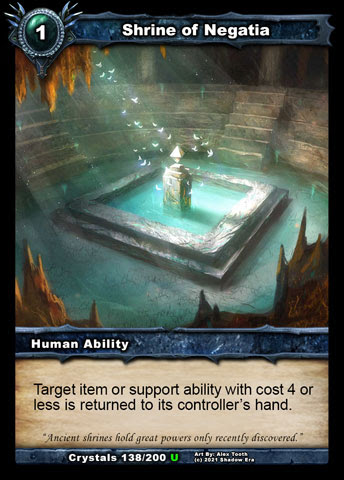 What's interesting with the above two lists is how similar they are despite being two different heroes. Busti's deck in particular was designed to be able to beat Moonstalker even through his ability, and he did so not once but twice to make it into the top four. Key cards in that are both the Priest of the Light playset, the full sets of Crippling Blow and Retreat!, and the Shrine of Negatias more at home against Millstalker but still able to take out Wrath of the Forest for a turn on the cheap. Their ability to reset pumped Amber weapons also came in handy to lock Boris into third. 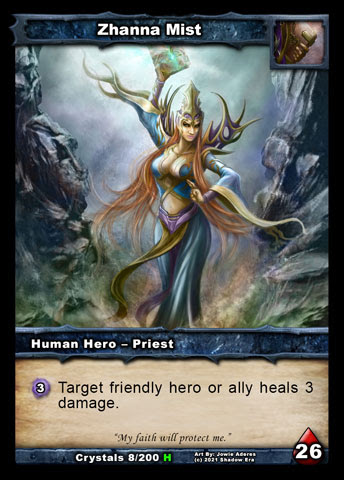 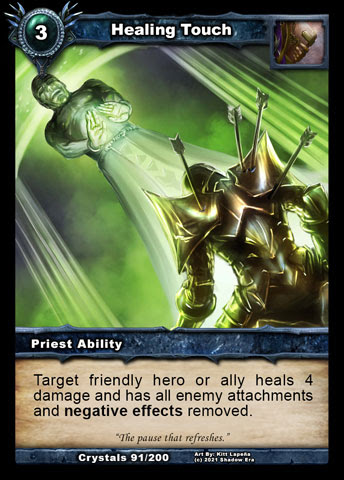 
Abilities (17)
Items (6)
Note first of all that Flycheung's Amber is a bit more aggressive than Jacqui's. Expect to see more Dirks moving onward in your Amber opponents.

The special tech in iClipse's deck is the underplayed Healing Touch, seen here in a full set. It can help you keep alive, or it can take off opposing Crippling Blows and Captured Preys. Which, naturally, helped in the nine games against warriors that had to be fought to become World Champion. I've tested the card out myself since and can safely say it has plenty of application.Aeon tends to not die in a single turn, and between Healing Touch and Zhanna's ability you can keep one active far more than usual.

What will these decks mean for the future of quick matches, and future events for that matter? Traditionally Moonstalker would keep Amber in check, but Busti has proven for everyone that a good Boris still wins that no problem. Majiya will slowly start to lower in popularity, and in its place will rise Zhanna decks packing a set of Healing Touch, which (just barely) let it squeak by into top dog above Amber.

So if human warriors are high up and Zhanna is one better, then what will consistently beat Zhanna?

Answer: speed. Zhanna's biggest issue (and this deck is no exception) is the lack of much to do in the first couple turns. iClipse's list plays nothing short of a set of Retreat! in particular, making it vulnerable to early rush, especially going second. I feel like a well-tuned Eladwen rush deck can take down Zhanna moreso than others, or at least this Zhanna list moreso than others. Then we enter back into the cycle, where Majiya and Zaladar decks have favorable matchups against those rush lists but apparently lose out to the warrior decks featured in the top four.

Other lists, such as Millstalker, Gwen, and possibly Ter Adun will surely play some role here (as well as Lance who lacked a large following at Worlds), but the basic formula may look similar to this for quite a while to come.

I personally recommend picking up one of the lists featured in this article and giving it a go, if not to compete with then simply to get a feel for it and understand how it works. After all, knowing your enemy is half the battle.

And now you know.